UFC Undisputed 2010 (also known as UFC Undisputed 2) is a mixed martial arts fighting game featuring Ultimate Fighting Championship (UFC) properties and fighters developed by Yuke's and published by THQ in 2010 for the PlayStation 3, Xbox 360, and (for the first time) PlayStation Portable. It is the second game to be released under THQ's 2007 agreement with the UFC and it is a sequel to the successful UFC 2009 Undisputed. Another sequel, UFC Undisputed 3, was released in 2012.

Each fighter on the Undisputed 2010 roster have skills and attributes that can be only viewed while selecting a fighter in expedition mode. Some fighters have different moves than others which can be seen by pausing the game and selecting the controls while using a fighter, again there is no other method to view a fighters moves. Shaquille O'Neal, as well as the Tapout crew from UFC 2009 Undisputed are unlockable fighters.[4]

In career mode, players can create their own fighter and make their way to the top of the UFC. The player starts in amateur fights and heads to the World Fighting Alliance, where after a successful run he is invited to fight in the UFC by Dana White. After victories in the smaller Fight Night shows, the player is given the option to fight in the pay-per-view cards. Consecutive victories lead to a title shot, and after winning the title and defending it for a while the player will be given the option to change divisions and fight for the title in another weight class. After 54 fights the player will retire and become a trainer, and if he had a successful career will be inducted in the UFC Hall-of-Fame.

There are many interactive options during Career Mode. Training for a fight involves a management system where the player pick an exercise where he can play sparring minigames, or automatically raise their stats. Along with technique stats are levels of strength, speed and stamina. Focusing too much on raising stats of a particular area will make the other stats decay, so the player must alternate between activities. After joining the UFC and raising his popularity, the player will receive many optional activities, such as participating in press-workouts with Rachelle Leah or photoshoots with Arianny Celeste. The player can attend weigh-ins during title fights and will be interviewed by Joe Rogan after every PPV fight.

The Classic Fights Mode from UFC 2009 Undisputed returns as Ultimate Fights Mode. Players can revisit some of the greatest fights in UFC history and unlock videos. Playing as the winner of a fight unlocks a highlight of the fight itself, while playing as the loser unlocks post-fight interviews. 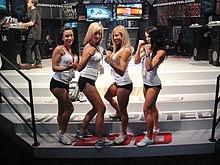 A teaser trailer of the game was shown on 12 December 2009 at the 2009 Spike Video Game Awards, where UFC 2009 Undisputed was named the Best Individual Sports Game, showing a first look at The Ultimate Fighter: Heavyweights contestant Kimbo Slice. The full roster was announced in April 2010.[5]

UFC president Dana White has declared himself "at war" with Electronic Arts over the development of EA Sports MMA. According to White, the UFC had hoped that EA Sports would pick up the publishing rights to the UFC's video game license, but EA Sports declined. White remarked: "EA Sports told us, 'You're not a real sport. We wouldn't touch this thing. We want nothing to do with this.'" The UFC instead partnered with THQ to develop UFC 2009 Undisputed. "We put our asses on the line, THQ and the UFC, to make a video-game deal in the worst economy in the world," White told reporters in July 2009. "We go out there and do this thing, and it's successful, and now God-damn EA Sports wants to do a video game.[6] White warned the fighters who intended to be included in EA Sports MMA, claiming that "If you do business with EA, you won't be in the UFC." Former UFC Heavyweight Champions Tim Sylvia[7] and Andrei Arlovski, as well as Fabrício Werdum, Dan Henderson and Frank Trigg[8] confirmed their presence in EA Sports MMA. Randy Couture was under contract with UFC before agreeing to be a part of EA Sports MMA, but is able to take part in the game due to never signing over his likeness to the UFC for use in video games; White has since changed his standpoint on this subject.[9]

The demo version of the game features four light heavyweight fighters (Lyoto Machida, Shogun Rua, Rashad Evans and Rampage Jackson).[10] Limited download codes were released on 29 April to members of the UFC Community and the demo was released publicly one week later on both PlayStation Network and Xbox Live.

The game has been met with overall positive reviews. Numerous video game websites have awarded the game with high praise for its various improvements over the 2009 version. The game's sales, however, were disappointing.[12]

Dakota Grabowski of GameZone gave the game a 9/10. His final verdict was "All in all, UFC Undisputed 2010 is a force to be reckoned with." THQ has put every other fighting game on notice as UFC Undisputed 2010 has moved into the domain of one of the best games in the genre."[13] Additionally, GamePro 's Caleb Newby awarded the game five out of five stars, calling it "an intensely satisfying experience."[14] GameTrailers gave it a 9.0 out of 10 stating that it one of the most technically accomplished and brutally satisfying video game entries to date.[15] However, IGN gave the game a score of 7.8. Reviewer Greg Miller stated that while the game is good, its little issues hold it back from being impressive.[16] GameSpot gave the game an 8.0 out of 10 stating that the game's strong point is the core game-play, while the menu-heavy career mode can prove to be a bit tedious. Though the reviewer later states that even though the career mode is flawed, it is still capable of keeping you engaged in your character's career. Good Game's two reviewers gave the game an 8/10 and 8.5/10.[17]