"Model X... Model Z... Power... I need your power. I need to protect the people, all of them! Give me the strength I need to fight for those I care about!"
—Vent/Aile to Model X and Model Z, Mega Man ZX

Model ZX was created through Double Megamerge during the first Mega Man ZX game, when Girouette gives Model Z to Vent/Aile shortly before his "death" at Serpent's hand and it is used alongside Model X. While Model ZX is treated as its own form by name, Models X and Z are still separate Biometals and must always be used together for the user to become the Model ZX Mega Man. Unlike the other Biometals, this fusion grows artificial hair similar to Zero. Vent/Aile also use Model ZX in Mega Man ZX Advent, and it can be copied by Model A.

When Doublemerged with Model X, the user dons a costume nearly identical to Zero's appearance. The helmet is slightly larger and more streamlined. Like the other Megamerged forms, the helmet features an arrow-shaped crystal that stretches from the crest to the back of the head and is colored green. The user also grows synthetic blond hair with appearance distinct from Zero and Girouette.

When transformed, glowing red lines appear around the body.

Model ZX combines the abilities of Models X and Z, and gives the user access to the ZX Buster and ZX Saber. 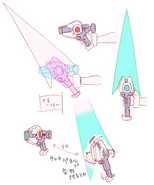 "Bigger's not always better. 10 years ago, if they had arrived earlier... Mom would still be alive!"
―Vent to Giro, Mega Man ZX

"I don't wanna hit a girl... But there's a reason I can't let you have it. I will become a Mega Man that can protect everyone!"
―Vent to Ashe, Mega Man ZX Advent

In Mega Man ZX, his attitude is quite kind and determined, but also reckless, hot-headed, and easily volatile. Because of his disposition, he got in trouble more often than not (such as his rapid change in attitude when someone talks about Slither Inc. or when he attacks Prometheus). He also possesses a desire to protect those around him, due to losing his mother right in front of his eyes, always saying, "I'll protect everyone!" or "Give me the power to protect everything!" He had a deep bond with and respect for Giro, calling him "boss" ("Senpai" in the Japanese version), having a sort of mentor-student relationship with him. According to Giro, he was a pain; having grown up as a lonely child, Vent seems to be always rude to the clients. When he is angry, Vent tends to be reckless, such as the time when he launched himself into battle to save the Guardians and Prairie, and at the same time merciless to some point (as is evident when he tells Purprill that, "Now there's nothing stopping me from taking you out!" after learning the latter's role in his losing his parents.); despite this, however, Vent tends to control his actions and ends up maturing with each battle.

Ten years before the events of Mega Man ZX, Vent went with his mom to the fair, where Mavericks attacked. The Slither Inc. forces repelled them, but Vent's mom was killed. It is said in Vent's story that Purprill was responsible for that Maverick raid. As a result of his mother's death, he hates Slither Inc. and Serpent, stating that should they have arrived earlier, his mom would still be alive; this is the main reason for his recklessness and his will to protect those who he loves.

Vent is the chosen one for Model X and through Double Megamerge can use the other Biometals. In the first game, Vent fights to retrieve the six Biometals and their codes, and to stop Serpent's Project Haven (which consisted in using the fear of Cyber-elves and people, by creating simulated Maverick attacks, and eventually use them as sacrifices to feed Model W. Along the way, he also was forced to relive his past when investigating a certain area, and upon learning that the Pseudoroid at the area was the same Maverick who attacked the theme park and orphaned him ten years prior, he stated that the Pseudoroid's story eased his conscience in regards to fighting him, as he now had absolutely nothing holding him back due to anger at the Pseudoroid's role in his being orphaned. Then, along with Vent's hatred, Model W would awaken completely and become the "Ultimate Mega Man"), ultimately his goal is to defeat Serpent and destroy Model W. After Vent defeats Model W and Serpent, he calls Serpent a Maverick, due to having played with the lives of many people, to feed Model W. Serpent, becoming angry, replies that it was Vent who impeded change and progress. Vent replies, telling Serpent that his concept of progress made a lot of people suffer, so he could not let him win. Serpent then declares Vent to be a fool, because the reason for which he fights is nothing more than preserving a hopeless world, and so long as humans have emotions, darkness would always hunt them; they are the true Mavericks. Disturbed, Vent watches the fall of Serpent's company, but is then given hope by Giro, as a Cyber-elf, and learns that he has the power to change the future and, as his last task as a transporter, is to guide the world to peace. Vent returns to the Guardians, forever thankful for Giro's words, aware that the world needs a Mega Man.

In the second game, Vent returns as an 18 years old,[1] now with longer hair, making him bear a strong resemblance to Giro; he is also wearing his jacket open with an emblem added. He appears in Ashe's story, still using Model ZX, destroying Model W's to end the Game of Destiny. He shows a more calm, calculating attitude, similar to Giro's, although traces of his temper can still be noticed when he gets angry with Ashe, saying "I should finish you off...". However, despite this, his protective attitude is still present.

Vent and Aile also appear together in an image, when Ashe receives the "Chosen Ones" cipher upon Aeolus's defeat, revealing that Master Albert, using his government position, made sure that select individuals who reported to Legionwere infused with his DNA.

Vent would later appear in Issue 55 of the Mega Man comic series. Due to a time travel accident in which Dr. Light was involved, he either visited or viewed Vent's time period.

Vent and Aile as seen in Aeolus' cipher.

Concept art for the Megamerge sequence.

"Sorry, but I can't let you have Model W... Especially if you're a Mega Man!"
―Aile to Grey, Mega Man ZX Advent

In Mega Man ZX, she seems to be more lenient towards others, excluding her foes and is a bit more compassionate than Vent. In Mega Man ZX Advent, however, her personality shifted a bit. As she got older, Aile seems to have become more professional with whomever she meets, as shown when Greywas blunt and disrespectful towards her when introducing himself. She also seems a bit more cocky compared to Vent, but she's still caring.

10 years before Mega Man ZX, Aile went with her mother to the fair, where Mavericks attacked. The Slither Inc. forces repelled them, but Aile's mother was apparently killed.

Aile is the chosen one for Biometal Model X, and through Double Megamerge can use the other Biometals. In this game, Aile fights to defeat Serpent and destroy Model W, to put a stop to Serpent's Project Haven, which consisted of using the fear of Cyber-elves and people by creating simulated Maverick attacks, and eventually using them as sacrifices along with Aile's hatred to feed Model W and awaken it as the "Ultimate Mega Man". After defeating Model W and Serpent, Serpent divulges that all Mega Men were designed to destroy each other and survive to control Model W, and that the process was all just a game to decide the ruler of the world. Serpent then continues on to say that even she has the blood of "the man who made Model W" in her veins, which disturbs Aile. As Slither, Inc. begins to collapse, Serpent claims that destruction still awaits them so long as humans have emotions, there will always be hate, they are the true Mavericks. Aile, still troubled by Serpent's words, is reassured by Giro appearing as a Cyber-elf telling her to forget the past, that destiny is not something that is given and that her power is the key to shaping her own future. With restored confidence, Aile swears to use her power responsibly to fight for what matters.

In the second game, Aile returns in Grey's story. She is 18 years old,[1] wears her jacket open with the addition of an emblem and has her longer hair tied up. She still uses Model ZX and has been destroying Model Ws to end the Game of Destiny. Vent and Aile also appear together in an image when the player receives the "Chosen Ones" cipher when Aeolus is defeated, revealing that Master Albert, using his government position, made sure that select individuals who reported to Legion were infused with his DNA.

Aile appears in person while inside the Quarry, where she ends up fighting the Mega Man Model A Chosen One, Grey due to a misunderstanding of intentions with Model W (both think the other was trying to retrieve it instead of both wanting to destroy it). As a consequence of the fight and her remaining afterwards, Aile also ends up exposed to the fifth cipher being unlocked inside Model A alongside Grey.