Star Force Mega Man, known as Shooting Star Rockman (シューティングスター・ロックマン) in Japan, is the EM Wave Change of the human Geo Stelar and his Wizard Omega-Xis. He is registered under Project-TC as No. 003, preceded by Acid Ace and Rogue, respectively. His appearance changed, after Geo obtained the Hunter-VG in Mega Man Star Force 3.

In the games, Mega Man was first formed when Omega-Xis crashed on Earth and met Geo Stelar while he was stargazing. Omega-Xis EM Wave Changed with Geo to stop EM Viruses that hacked a train.

In the anime, Mega Man first formed the day after Geo and Omega-Xis met (although a vague silhouette is seen briefly when the two first collided). The two EM Wave Changed in order to save Luna Platz from a train accident caused by viruses. He does not become Mega Man right away, and he can not become Mega Man unless he "pulses-in" and becomes waves which resemble Mega Man. His main attack is the Mega Buster, which is Omega-Xis' head, and can use Battle Cards. 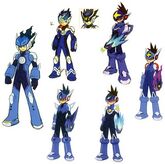 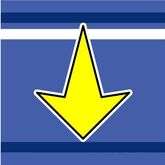 "My name is Geo Stelar. I'm 11 years old. My father disappeared while working in the satellite 'Peace'..."
—Geo, in the anime.

Geo Stelar, known in Japan as Subaru Hoshikawa (星河スバル Hoshikawa Subaru), is the main protagonist of the Mega Man Star Force series. He's a lonely 5th grader who has lost his father prior to the start of the games, anime, and manga who lives in a town known as Echo Ridge. He is the son of Kelvin Stelar and Hope Stelar.

In both the anime and games, Geo starts out depressed and sad because of his father's disappearance in space. He gradually opens up to others, as evident in the anime by hanging out with Luna's gang a lot, and in the games, creating BrotherBands with others and going to school (the anime's decision of going to school doesn't count as opening up to others, since Omega-Xis forced him to go). While Geo does come to understand the benefits of bonds, losing others still causes his faith to shatter, such as having to fight Pat in the first game, Sonia's breaking of their BrotherBand in the second (albeit forced), and the apparent death of A.C. Eos.

His attitude changes drastically around the end of the second game, and he begins to act a little more friendly. In the third game he begins to dream about food and sleep in, but it is uncertain as to if the change was intended to make him more 'Lan-like', or if that was how his persona was intended to be. Most likely it's simply that Geo has started to mature and change, something Omega-Xis notes early in the game.

Geo is also shown to be very adept with machines, able to tell what makes them tick and learn new technology. He also has very high interests in astronomy, and it is hinted that he is afraid of ghosts.

In the anime, Geo is more outgoing and more willing to risk his life for the greater good, unlike the first game where he says he doesn't want any part of violence.

Geo has brown eyes and spiky brown hair that peaks from the back of his head in several large forward-pointing tips. He keeps his green Visualizer raised above his forehead when not being used, and has a golden star-shaped pendant around his neck. He wears a red long-sleeved shirt with white shoulder markings, yellow detailing, and a closed collar. At the shirt's waist is a large yellow band; around this is a light blue belt for his back pockets, which has a silver buckle. He wears dark blue knee-length shorts and red boots with white and black soles, as well as small yellow protrusions at the heels. On his hands, Geo wears red fingerless gloves with yellow squares on their backs, which widen into red-and-gold discs around his wrists.

Geo was once a happy kid who looked up to his father, who was an astronaut, and Geo wanted to be just like him. However, Kelvin went missing 3 years before the game began, in an incident when he was sent to space to contact and make peace with extraterrestrial beings (a.k.a. aliens or species outside of Earth). The spaceship he was in crash-lande