A long time ago, Mega Man Volnutt was known as Mega Man Trigger. Trigger's primary function was as a Purifier Unit (Irregular Hunter in the Japanese version) on a synthetic planet called Elysium (or Heaven in the Japanese versions), a place that housed what is called the "Master System". The purpose of the Master System was to watch over the Carbons (essentially the equivalent to humans, though artificially created) on Terra. His job as a Purifier Unit was to eliminate any Aberrant Units (Irregulars in the Japanese version) that threatened the Master System. Trigger was also always close to the the Master throughout his tenure as a Purifier Unit. One day, the Master requested Mega Man to travel with him to Terra so he could see the Carbons, even though the Master could not survive long outside of Elysium. They used a shuttle pod and landed in Calbania Island, where the Master compares the life of the Carbons with Elysium, and realizes that while he lived in luxury for 3000 years, Elysium was cold and sterile, while the Carbons are happy even with hardship, pain, aging, and subsequently dying, and decides to give Mega Man the final command to destroy the Master System to make things right again. Before dying, the Master gives his genetic code sample to protect Mega Man, and orders him to delete all data in Elysium's library.

After the Master's death, Mega Man Trigger tried to fulfill his dying wish. The units from the System tried to stop Trigger, thinking he became an Aberrant Unit. As time went by, Yuna (Mother Unit of Terra) decided to take a neutral position, neither helping nor fighting against Trigger. Frustrated with Yuna's decision, Sera (Mother Unit of Elysium) traveled to Terra herself to stop Mega Man, and the two fought each other to a standstill, expending all their energy. Trigger's original body was almost totally destroyed in the fight, and all his parameters had to be reset to heal (similar to formatting a hard drive), transforming him into a baby without any memory of the past. To avoid his memory being wiped out and make sure Sera would never find the Master's genetic code, Trigger transferred his essential data files to Data. Yuna took the opportunity to seal both inside stasis fields, with Mega Man and Data being sealed inside a ruin in Nino Island and Sera with Geetz in Forbidden Island, where they stayed for a long period.

Several years later, Barrell Caskett was researching the ruins in Nino Island without the Guildmaster's permission, and found a diamond-shaped object near the entrance. When he touched the object, it melted away and awoke Mega Man and Data from their suspended animation. As Barrell had broken into the ruins without permission he could not reveal where he had found them, so he took the two under his care. Barrell's granddaughter Roll Caskettinsisted on naming the baby after one of her favorite video game characters, so the child was named Mega Man Volnutt (in the Japanese version, Barrell named him Rock to make a pun with Roll).[1] As soon as Mega Man was old enough, he embarked on the life of a Digger, searching for Refractors and other resources for the Caskett family as well as defeating Reaverbots in his many adventures.

After exiting a digout in a tower, the Flutter began to malfunction and crashed on Kattelox Island, where the first game takes place. Mega Man helped to protect the island from the attack of the Bonnes, a pirate family searching for legendary treasure supposedly hidden in the ruins of the island, and that if its seals are broken, a terrible disaster will occur. Before facing the pirates, Mega Man meets Tron Bonne and helps her escape from the dog Paprika, and she develops a crush on him. The island's city mayor, Amelia, is an old friend of Barrell and gives them a Digger's License to allow them to search the ruins for parts to fix the Flutter. By Amelia's request, Mega Man also investigates the ruins of the island to learn about its past and if the legends are true, fighting against the Bonnes and Reaverbots during his search. When the Main Gate is opened he encounters MegaMan Juno, a mysterious person who knows about his past life as Mega Man Trigger. Juno captures Mega Man in order to keep him out of the way while he prepares to use Eden to eliminate everyone on the island. Mega Man is freed by the Bonnes and he fights against Juno to save Kattelox Island. After Juno's defeat, Data reveals he knows about Mega Man's past but can't reveal it to him yet, but when the time comes, he will tell him everything, including his mission. The game ends with Mega Man and his family leaving the island aboard the Flutter.

In the second game, Barrell and his friend Verner Von Bluecher travel to Forbidden Island aboard the airship Sulphur-Bottom in the hopes of finding the Mother Lode. Unfortunately, the airship becomes stuck in the storm that perpetually surrounds the island when it is attacked by Gatz and "Matilda"—a woman who looks like Roll's long-lost mother. Mega Man and Roll go to Calinca to try to find a way to rescue the Sulphur-Bottom and to discover if Matilda really is Roll's missing mother. In order to get through the storm Roll plans to create a Dropship. While searching for parts at the Junk Shop in Calinca they encounter Joe, a man with amnesia who was also creating a Dropship. After Mega Man and Roll save him, he gives his Dropship to them as thanks. After traveling through Forbidden Island, Mega Man accidentally freed Sera and Geetz when he stopped the storm surrounding the island to prevent the Sulphur-Bottom from crashing. They were taken inside the Sulphur-Bottom where Geetz says they need to obtain four keys to unlock the Mother Lode. Bluecher requests that Mega Man search for the keys, and so he embarks on a journey that sees him fighting against Reaverbots and pirates to obtain them. After all of the keys have been collected Sera and Geetz turn on Mega Man. As Geetz engages him in battle Sera escapes to Elysium with the keys. At the conclusion of their fight Geetz explodes, causing heavy damage to Mega Man. Working together Yuna and Data are able to repair him, and during the repair process Mega Man recovers part of his memories as Trigger. Once restored to full strength, Mega Man follows Sera to Elysium to stop her from using the Carbon Reinitialization Program. At the end of the game Mega Man is left trapped on Elysium along with Yuna and Sera, while the enigmatic Elder System begins to reactivate. Back on Terra, Roll and Tron began working together on a rocket to rescue Mega Man.

Mega Man would have appeared in Mega Man Legends 3, where he is still stuck in Elysium and would be rescued.

This version of Mega Man has lived two completely different lives. This is in contrast to all his other incarnations in the other series where he lives only one life and one basic role throughout the duration of the series. His first life as Mega Man Trigger is quite similar to that of the Maverick Hunters in the Mega Man X series where his role on Elysium was to protect the Master System from Aberrant Units as well as serve as the Master's special assistant. Thus, Trigger was one of the greatest and highest ranking Purifier Units, much like X was as a Maverick Hunter.

On the other hand, his second life as Mega Man Volnutt is actually closer in similarity to another key aspect of both the original Mega Man and X. Mega Man Volnutt does not like fighting and only does so as a last resort (as evidenced by his regret for "not taking it easy" on the Bonnes in the first game, when they fall after Focke-Wulf's defeat). Other than that however, Mega Man Volnutt is simply another Digger in search of adventure, Refractors, and other treasure just like all the rest on Terra. He also cares deeply about Roll and does his best to keep her happy, especially when she is despairing about her parents. Roll also cares about Mega Man, to the point of stating in her diary that she secretly loves him.

Main article: Mega Man Volnutt's weaponry
Being able to exchange and customize parts of his body, Mega Man is able to use a variety of robotic armaments and abilities.[2]

In Namco × Capcom, Mega Man Volnutt appears alongside Roll Caskett as a playable team with their opposition being MegaMan Juno. The game takes place during 20XX, in which is the same time period as the classic series, but the characters from the Mega Man Legends series are from the distant future. In this game, the Flutter is able to travel through space and Mega Man is a Class A Digger that searches ruins on other planets.

Mega Man and Roll first appear in Chapter 21, where the Flutter suddenly crashed into the Third Moon, and they are attacked by its defenses, which included several Reaverbots and Mega Man Juno. The two and the Digger Taizo Hori are rescued by the party and join them, using the Flutter to escape the Third Moon when Hiryu set it to explode in the beginning of Chapter 23. Mega Man and Roll face Juno a few times during the course of the game, having their final battle inside Eden in Chapter 44.

In Tatsunoko vs. Capcom, Mega Man Volnutt appears as a playable character, along with Zero and Roll. His theme music is the "Flutter vs. Gesellschaft" from the first game. In his ending, he located a black red-eyed, skull-shaped treasure (actually the Dokuro Stone, a stone from Yatterman that grants wishes) that the Reaverbots were guarding, and managed to procure it before Boyacky, Tonzura and Doronjo did.

In the Tatsunoko vs. Capcom: Cross Generation of Heroes version of the game, Mega Man appears in Yatterman-1's ending, where he is wearing a blue mask and is identified as Yatterman-6. In the Wii version, Mega Man has a mini-game where Servbots get in and out of four boxes, and players must guess how many Servbots are inside their box.

Mega Man Volnutt is a playable character in the mobile phone games Rockman DASH: 5tsu no Shima no Daibouken! and Rockman DASH Golf.

Mega Man Volnutt and his timeline were later featured in Issue 55 of the Mega Man comic series, an appearance made possible due to Dr. Light being sent on a journey through time. He also appears in the Short Circuits for the issue, where he complains about still being trapped on the moon at the end of his series.

Mega Man as he would have appeared in Mega Man Legends 3.

Mega Man Volnutt in Tron's ending in Marvel vs. Capcom 3. 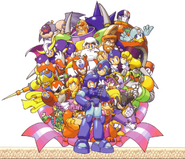 Front, side and back view of Mega Man in Mega Man Legends 2.